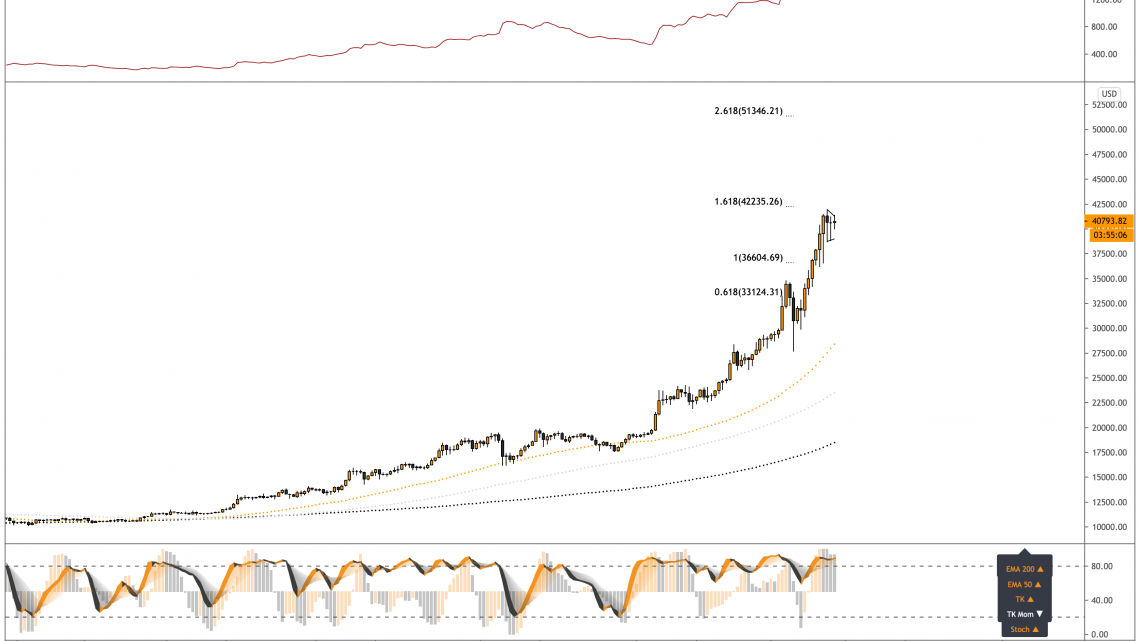 Middaily is showing local consolidation going on between 38.7-42k which on the intraday basis is contracting in a form of a symmetrical triangle. Of course chart remains extremely overbought which is typical to the strong upside rallies. All the averages go up for BTCUSD right now: MA50, 100, 200, which means that from the medium-term perspective we’re very bullish and nowhere near major peak other than corrections. So far BTCUSD has shown very sharp and short-lived selloffs, which may hint that corrections this time would not necessarily take 1-2 months to complete, but rather 1-3 weeks instead. The market pace is definitely heated up heavily so I wish luck to anybody shorting this – it’s a suicide at those market conditions from the logical and investment point of view. Herds do not expect correction anytime soon which is also of significance. I personally choose to follow what whales are doing – where they cash out which causes 4-6k market sell dump bombs. If they cash out, and its after 100%+ rally in under 1 month, then it’s quite a signal to me that there’s reason why they dump 100-300M $ with every bigger dip. Any major dip (because of huge volatility) will likely be bought back quickly – the quicker, the higher on the chart we are as that’s the nature of volatility. After every strong impulse move pump/dump, market seeks coming back to the equilibrium point, so the larger the dump, the larger the buy back. Supports for bullish reaction: 28.5k (MA50), 23.5k (MA100), 18.5k (MA200) – last one only in case of black swan imo Resistances: 42.2k, 50-51.3k, 55k, 59-60k

LTF-MTF picture shows hidden bullish divergence on BTCUSD in the short-term past, which should suggest upside rally should continue after reloading. Breakout or breakout retest entry would probably mean alt/btc correcting after they’ve recovered by ~5% average. What’s significant in this chart is the top indicator as well – ATR (Average True Range), which shows average volatility from 14 past intervals. Note that in past 30 days the average 4h volatility has increased by more than 600%, while ~185% increase comes only from last 7 days. The volatility always increases as we approach peaks. I’m the last person on the planet to tell you BTCUSD is turning bearish market anytime soon, but do also expect the unexpected. History, the greatest teacher, shows that 30-40% retracements are common for BTC even in the most vertical rallies. Sure they should be bought back fast, yet it should empower the narrative of protecting your gains rather than giving it all back to the market. I said I cashed out 10% of my BTCUSD profits yesterday and I’m going to repeat it on Monday. Not because I believe BTCUSD is bearish, but because I’ve doubled my USD holdings in past 30 days. I much more prefer to leave the market early as I’ll never sell the top, rather than stress out and never get desired exit level on the more bearish side of the trend. I would lie if I told you I know where BTCUSD is going to peak. My guess is 100k but God knows where it’s set to stop. What I know for sure though is that after this bull market peaks, there is a bear market coming. And after that bear market, another bull market which will probably take us even higher. Sure, enjoy markets rallying but book profits before somebody else does it instead of you. Local Supports per averages: 35k (MA50), 31k (MA100), 26k (MA200). Resistances given same as in 12h Enjoy and expect lots of intraday traps, fakeouts. Nothing is certain.

Another reason is that Im planning to recirculate those gains into way more undervalued commodity market (see the chart below). BCOM index has recently confirmed critical upside breakout after 12 years of bear market in the expectation of rising inflation after Biden won the elections promising more QE. I’m expecting commodities (including btc/crypto has the “stigma” of digital gold with deflationary model) to soar in next years. It’s good to keep your portfolio diversified and well-balanced.