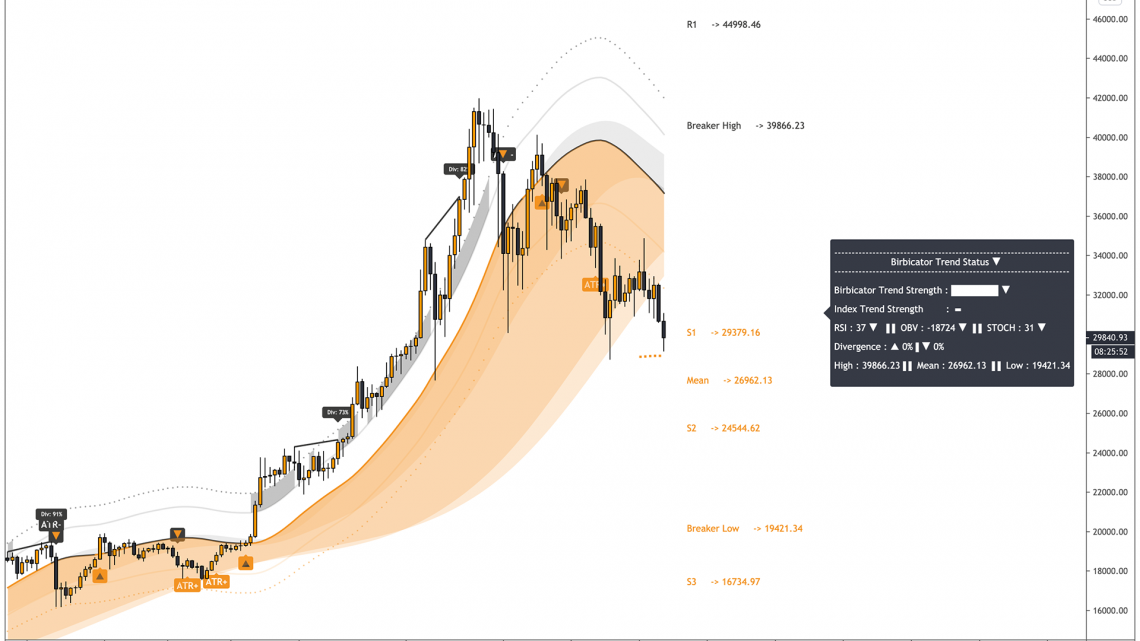 Middaily session is clearly following my weekly report anticipations regarding downside correction to continue. Serious bull trap around 35k faked out the breakout and closed heavily below which itself was enough of the bearish indication. Price Action is trading on the bearish side of the BPRO clouds while tapping BPRO VWAP support at 28.8k with no sharp bullishness or visible demand shaping. This means and suggests further downside declines towards 23-26k area, just like I’ve been mentioning since January started. Clean downside breakout of BPRO bands consolidating is quite a strong signal, accounting that the most recent sell signal came around 38k and has never flipped bullish ever since. Supports expected to be tapped as follows: 26962, 24544, 23000. The key resistance to break and flip to bullish trend is 39866. BPRO rocks.

Here’s my last Monday’s MTF analysis and it’s perfectly valid. Have a look: MTF picture is showing BTCUSD heading straight into low timeframe supply zone of the downtrend. BPRO volatility bands are still downside oriented yet the angle seems to be slightly improving. Local VWAP resistance at 33.9k is considered reclaimed locally if 4H sessions closes through. This side of BPRO gray cloud is filled with supply and until breakout retest over the upper band appears, the tendency is unquestionably bearish per BPRO and that’s the main narrative. BPRO trend status flipped orange bullish which is improvement vs yesterday. In case daily open isn’t reclaimed by bears below within next 2 days, the local retracement around 32k could serve as a decent entry level on quite a bit more confirmed LTF upside. Failure to close over 34k would bring SFP and local invalidation for bulls. BTCUSD is clearly open still for the 5th wave down in case LTF retracement turns into an actual LTF trend, which cant either be excluded. In other words, low timeframe bulls are trying to end the correction yet it’s definitely not finished or reversed yet. Until then, the narrative and LTF-MTF tendency is bearish. If unpredicted news-driven event occurs, e.g. Biden fully legalizing crypto or similar happens, this could accelerate the upside breakout towards the resistance levels as follows: 38676, 40759, 42831. Invalidation of 23-26k scenario comes only after breakout RETEST succeeds to hold over the upper BPRO band over 36k supply zone marked in the chart.