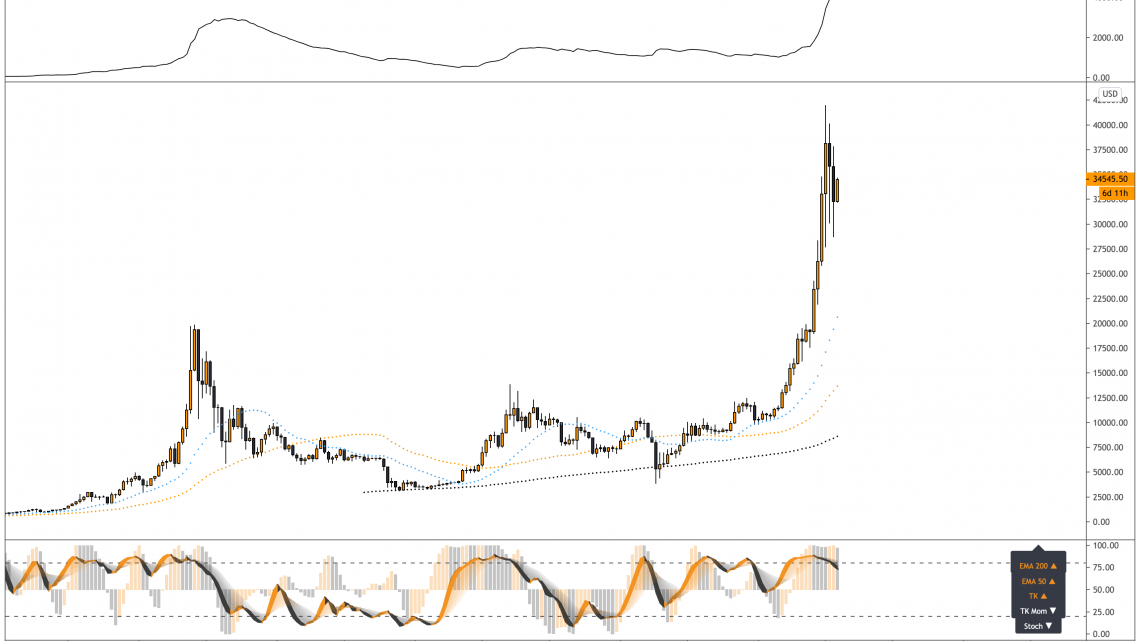 Weekly chart is showing clean downside orientation locally. Although weekly timeframe indicators are lagging quite a bit, this is unquestionable we are looking at the MTF correction in January, just like I had said earlier in December. That is why I would not be overly optimistic just yet about the intraday pump we’re seeing on today’s price action. As BTCUSD has shown many times in past months, weekly opens may show strength and often set the high of the weeks in first 2 days of the week and then decline for the rest of the week. Price Action wise, BTCUSD marked lower high & lower low week, which itself is bearish. Weekly open is strong yet breakdown and daily close below 32.3k would anticipate further declines towards lower lows area and 23-26k zone. For this reason, based of weekly chart it is clear the downside scenario is still in play. Let’s move to the lower timeframes for further insights.

Daily chart is showing bullish momentum cross near oversold area which is quite a significant bullish symptom. 28.8k retest was the first MA50 retest since 10k breakout, while still remaining on the bearish side of the local retracement. Any price action below the diagonal trendline is officially bearish until the breakout retest reclaim appears. 32.1k daily open appears to be strong, yet as said – we should not get over excited at least until breakout to the bullish side of the correction. Early reversal signals are there, yet remember that Mondays are often tricky and full of fake moves. So far it’s looking strong.

Middaily is showing decent strength locally and so far trading above the prior local supply area 33-33.8k. If this zone is reclaimed intraday as a new support and the daily closes above this zone, the BPRO indication would suggest increasing chances of retesting 35k and 38k levels. While it may happen, traders should not forget that local average is locally declining (showing bears are not completely gone for sure) while the bands are squeezing, proving consolidative nature of the movement from past weeks. The major MTF resistances are as follows: 39866, 46281, 51254. Supports: 30217, 25620, 25244.

MTF picture is showing BTCUSD heading straight into low timeframe supply zone of the downtrend. BPRO volatility bands are still downside oriented yet the angle seems to be slightly improving. Local VWAP resistance at 33.9k is considered reclaimed locally if 4H sessions closes through. This side of BPRO gray cloud is filled with supply and until breakout retest over the upper band appears, the tendency is unquestionably bearish per BPRO and that’s the main narrative. BPRO trend status flipped orange bullish which is improvement vs yesterday. In case daily open isn’t reclaimed by bears below within next 2 days, the local retracement around 32k could serve as a decent entry level on quite a bit more confirmed LTF upside. Failure to close over 34k would bring SFP and local invalidation for bulls. BTCUSD is clearly open still for the 5th wave down in case LTF retracement turns into an actual LTF trend, which cant either be excluded. In other words, low timeframe bulls are trying to end the correction yet it’s definitely not finished or reversed yet. Until then, the narrative and LTF-MTF tendency is bearish. If unpredicted news-driven event occurs, e.g. Biden fully legalizing crypto or similar happens, this could accelerate the upside breakout towards the resistance levels as follows: 38676, 40759, 42831. Invalidation of 23-26k scenario comes only after breakout RETEST succeeds to hold over the upper BPRO band over 36k supply zone marked in the chart.

Hourly is showing local upside trend (low, high, higher low followed by higher high) with 34k being the most significant intraday support, which once broken may bring invalidation to local bullishness – bull scalpers should stay cautious. Upper BPRO bands show supply in 35.4-37k area, which will be the key zone to reclaim by bulls to finish correction. Until that happens, bears are in control officially despite early reversal signs which may or may not dispute the idea of 23-26k scenario. Reclaiming this zone on MTF 4h and 12h timeframe (candles closed through this zone) brings much bigger vulnerability and potential invalidation of 23-26k but it does NOT mean the concept is invalidated as of yet. To evaluate intraday strength in bullish favor, BTCUSD must not break/close below 34k support. If that happens, it adds to the bearish advantage. The market is a constant battle between bulls and bears and their relative advantage is what traders should try to discover. Neither of these are ever really gone. It’s always their relative power. If intraday traders or short term day traders are willing to play this choppy zone, please launch your BPRO buy/sell signals from trend change and ATR. Good luck and enjoy your BirbicatorPRO access. If not received yet, book it below.