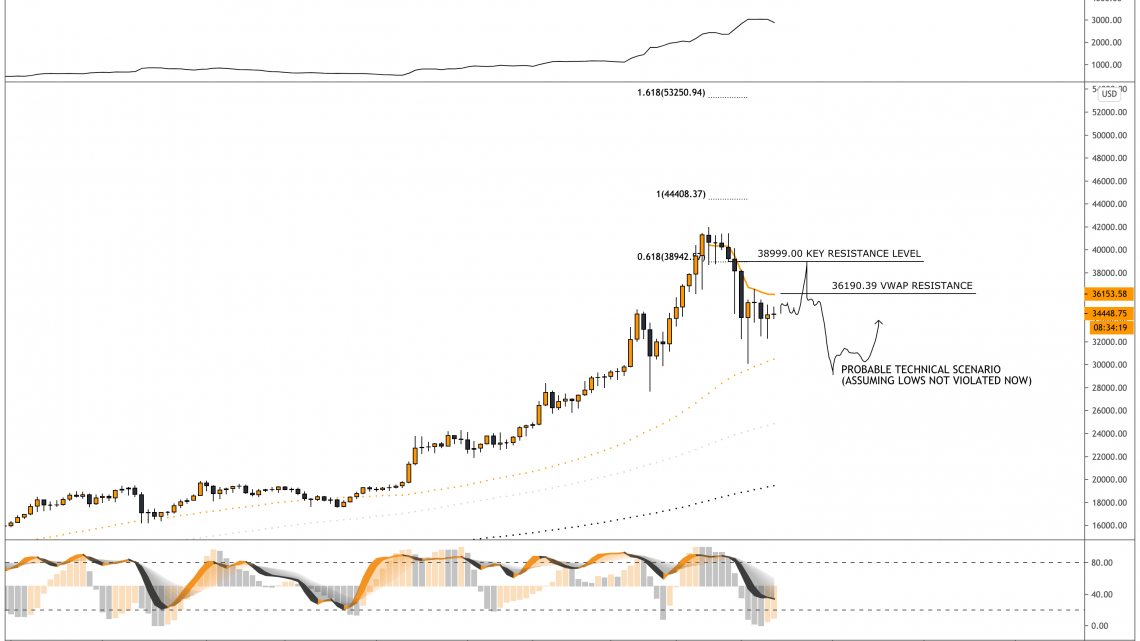 Middaily picture is printing local consolidation and lower volatility period (lots of spinning top and doji candles) after massive breakdown. In fact, that was the largest price nominal breakdown BTCUSD has ever seen. Percentage wise it was close to 30% so nothing unusual and in bull markets its just a matter of time until the new highs are made on top of the correction. By definition, the correction or corrective wave provides you with compounding/buying opportunity to add to your long term exposure. Those have been my thoughts over past weeks where I suggested it was too late adding to long term bags anywhere above 35-40k zone until 30-40% decline would come in January-February period. And boom, here we are. Momentum is following the complete reset scenario as given in my past reports. Now at 33 points, close to oversold area, while it should reach 0-20 anytime soon. This local consolidation is nothing else but ultra volatile choppy price action with no direction. It makes it extremely hard to trade for me personally. Because I cashed out portion of my profits at 41.5k on average despite the spread, my eyes are looking for support anywhere around 25-27k which is quite likely to be revisited. Overall, in case DXY declines because of US events and Biden’s QE plans, we may see upside pullback towards 39k which is key resistance level (pre-breakdown level). Most probably would see slight over throw over this level to liquidate over leveraged late bulls. This case will be validated only by reclaiming orange VWAP level 36200 (breakout + retest needed). Otherwise as long as BTCUSD stays below 36200, tapping 25-27k is as likely as tapping 39k first. Hence key level to observe is 36200.

MTF picture is showing two main interest areas from technical point of view: cluster of supports between 33.6k and 33.4k, as well as cluster of resistances 40.1-40.7k. Blue curve is the same as orange VWAP anchored on the peak of the market to show how price evolves on average after accounting Volume. Price Action has been rejecting MA50, which clearly shifted from aggressive uptrend to more steady and slow growth. Room for drop towards 27.5k MA200 support anytime that PA violets mentioned support area. Reasonable scalp long plays can be executed only above VWAP+MA50 resistance reclaimed. Until it happens, the orientation is slightly more to the downside or neutral at best. Overall, that’s the correction time I had been warning it would come in Jan-Feb. So now that it’s here, things slow down and let you re-establish the trading plan and risks taken, also analyze mistakes made before.