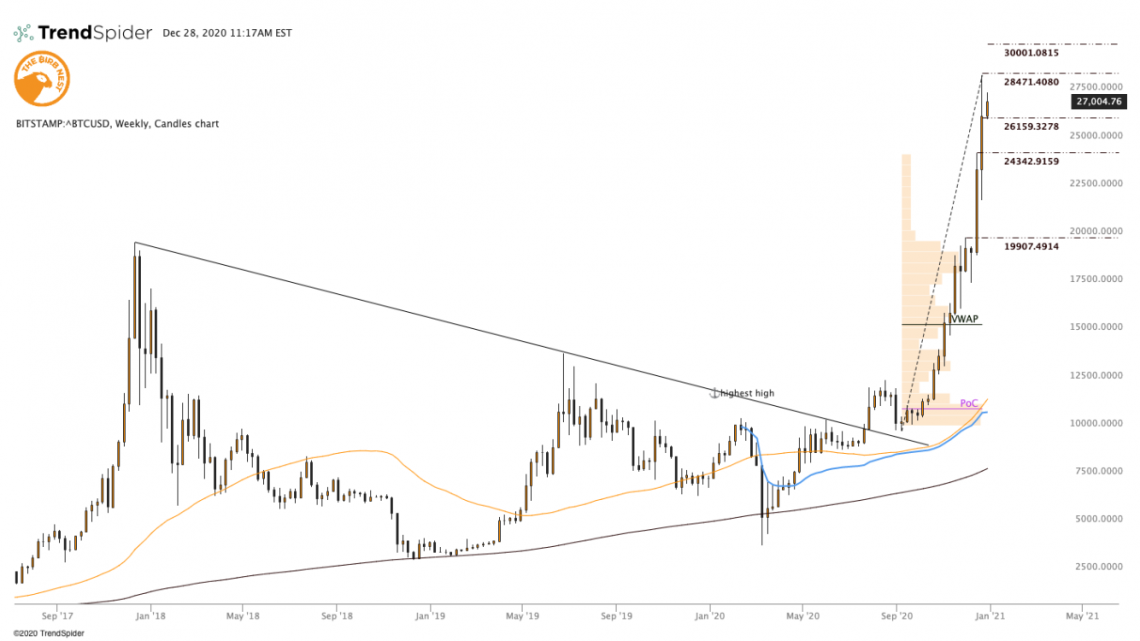 Weekly closed as a very strong a big volatility candle with both supply and demand clearly shown in form of the wicks around the candle. Entire zone of 26.2-28.4k appears to be LTF supply inside which traders could anticipate stronger selling the closer it gets to the wick peak, same as strong buying within the lower shadow – 21.9-23.4k. MA50 is accelerating with support at 11.5k in case of any global crash (obviously not expected). We’re clearly in the optimism phase of the market cycle with the next resistance to be 30000$. Accounting the recent growth and overall strong seasonality effect of January-February period, I would expect those months to be slightly more corrective. The most reasonable scenario to anticipate is MTF blow-off top around 30k (massive milestone), followed by few weeks of wide-range consolidation that could include lots of 15% and even 40% retracement. The corrective time would not rather look like the slow, boring weeks sub 10k. It’s brand new market phase right now where corrections are sharp due to big whales cashing out at key resistances and market taking time to recover from the price shock for some days/weeks. The volatility clearly is increasing which will make it harder and harder to counter trade the trend. Beware!

Daily session closed as a typical shooting star type of a candle. While this is usually a bearish candle formation, it’s more important to account overall bullishness of the market context over any candle formation or a chart pattern. Locally strong supply appeared within 26.4-28.4k zone and as long as price action remains below the peak of the shadow, it’s vulnerable and expected to follow intraday sideways movements with more uncertainty and indecision. I think we are soon to experience final blow-off move ~30k that would close 2020 and initiate January-February correction. That’s of course assuming the market cycles will repeat the history to some extent. Volume profile doesn’t seem to confirm we’ve seen top yet so next bigger resistance is in fact 30k. While the momentum is heavily overbought across all the remaining timeframes, it would make quite a good sense to enter few weeks of correction starting with a volatile marked dump into 2021.

Middaily is showing local sideways (Stochastic vs TK histogram divergence) and rather market taking a quick breath rather than actual reversal. Some choppy sideways like 22-24k zone expected between the trading range bound 25.8-28.4k. Technical analysis would suggest the breakout target would be around 30.5k, which is quite likely to arrive as we head into 2021. Trend is still strong as still no reversal spikes on ATR (upper indicator) has been spotted.

4H chart suggests that key local resistance is reclaimed as a new support locally at 26521. Strong bullish engulfing candle pushed through the resistance. It may be symmetrical triangle or other form of bullish consolidation forming right now. Until breakout occurs in either direction (upwards is most likely ofc), intraday traders can claim the strategy to buy the range lows and sell ther range highs until proven wrong. Trend is in clear local sideways

Hourly picture is quite simple. Slightly deviated ascending triangle is forming along the MA50 support. In case of a breakout the technical target would reach as high as 28.8k (measured rule). As long as BTCUSD is sitting inside the orange cloud of BIRBICATOR PRO, it’s safe in bullish MTF uptrend. Strongest resistance is 27.6k to break and once broken and reclaimed as a new support, it should initiate further and stronger upside rally. The scanner on the bottom confirms the local uptrend context. You can also still catch the last 40% off discounts within our III anniversary celebration while seats are actually running out already. Use the discount coupon to prolong your membership, upgrade or move from trial to exclusive membership. Don’t miss out this time again…